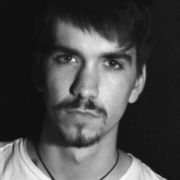 Luis Azcona is a contemporary percussionist and creator from Zaragoza currently living in Bern, Switzerland. He is specialised in Sound Arts and Chamber Music, although his career as a soloist accumulates awards, recognitions from numerous foundations (Lyra, Hirschmann) as well as concerts, lectures and masterclasses.
A student of Brian Archinal at HKB, Luis bases his work on the exploration of poetry, sociology and politics. His aesthetic universe is situated between noise, post-percussion, the historical approach to contemporary music and an experimental vision of artistic experience.
He has collaborated closely with composers such as Alberto Bernal, Wojtek Blecharz, Yiran Zhao, Michael Maierhof, Yesid Fonseca or Arturo Corrales, detailing their pieces and making studio recordings of several of them. He has also premiered works by Voro García, Marina Picaporte, Ch. Spitzenstaetter, Wataru Mukai, Gemma Ragués and David Julián Carrillo. During 2021, he will premiere works by A. Bernal, Helena Cánovas, Eduardo Valiente, Luciano Azzigotti…
In 2021 he has been admitted to the academies of Ensemble Modern (IEMA) and Ensemble Intercontemporain (Ulysses Ensemble), and will play between June and September in Festivals such as Mixtur 2021 or Manifeste Paris.
He has been conducted by conductors such as Beat Furrer, Peter Rundel, Nacho de Paz, Peter Eötvos or Fabián Panicello, and has collaborated with ensembles such as Synergein Project, Nuevo Contemporáneo, NEKO3, Freixenet or Academia para la Nueva Música. He is a member of the new collective Cuarto de Tono.